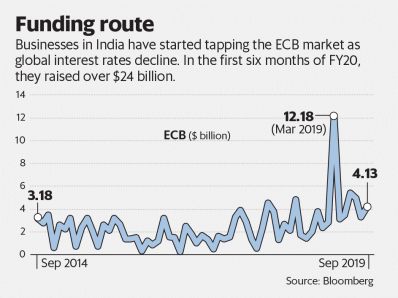 To be sure, despite this shift, banks are still the single-largest source of funds for businesses, and ECBs made up just 12% of their total borrowings in FY19.

However, bank credit growth has been subdued so far this year, with outstanding non-food credit growing 8.8% year-on-year (y-o-y) to ₹97.68 trillion in the fortnight ended 25 October.

According to a 6 November report by CARE Ratings, it needs to be seen if bank credit picks up in the rest of FY20 when economic activity generally tends to be higher, to ascertain the extent of substitution, if any, in the sources of external funds of businesses.

The CARE report said companies from the financial services sector continue to dominate external borrowings, accounting for nearly 47% of the value of ECB in the first six months of the current fiscal, up from 35% a year ago.

Another interesting trend is that companies are mostly using this route for their working capital requirements. In September alone, of the 117 entities that raised money, 45 needed working capital.

“The primary reason for corporates to seek funding from ECB is the better pricing they are getting. With the currency becoming slightly strong and the hedging costs becoming cheaper, the all-inclusive cost is still lower than raising money in India,” said Ajay Manglunia, managing director and head of institutional fixed income at JM Financial.

The CARE report said that of the total ECBs raised during April-September 2019, nearly 65% fell in the 3-5 years maturity bracket and less than 10% of borrowings were for tenures of over 10 years, indicating ECBs are not relied upon for financing longer duration projects.

Others believe that an RBI regulation that aims to de-risk the banking sector for concentrated corporate exposure could be limiting banks’ ability to fund large businesses.

According to Soumya Kanti Ghosh, group chief economic adviser, State Bank of India (SBI), the large exposure framework may be acting as a constraining factor in bank lending to such entities and hence they are tapping the ECB route. The RBI regulations, which came into effect on 1 April, mandate that banks limit their exposure to 25% of their capital for connected parties.

“As far as the non-banking financial companies (NBFC) sector is concerned, though the banks expanded their lending in the first half of FY20, the markets seemed to have lost appetite in funding of NBFCs, even the commercial papers (CPs). Subsequently, a large part of NBFCs are tapping the ECB route mostly for onlending,” Ghosh wrote in a report on 16 October.

« Q2 GDP growth could fall below 5%
Economists say growth for FY20 may slip to around 5% »
%d bloggers like this: