IMF forecasts India’s growth will improve to 7.5% in the next fiscal

NEW DELHI: India will grow at a world-beating 7.5% in 2019-20 amid slower global expansion, the International Monetary Fund (IMF) said, upgrading its October forecast of 7.4%.  “India’s economy is poised to pick up in 2019, benefiting from lower oil prices and a slower pace of monetary tightening than previously expected, as inflation pressures ease,” IMF said in an update to its biannual World Economic Outlook (WEO) on Monday.

Without naming India, IMF said that in emerging markets and developing economies, where inflation expectations are well-anchored, monetary policy could provide support to domestic activity as needed.
With retail inflation slowing to an 18-month low of 2.19% in December—though services inflation remains elevated—many analysts believe the Reserve Bank of India’s (RBI) monetary policy committee will cut policy rates at its review meeting on 7 February.

“We will take necessary steps to maintain financial stability and to facilitate enabling conditions for sustainable and robust growth,” RBI governor Shaktikanta Das said in his first speech at the Vibrant Gujarat Summit on Friday after taking charge as the central bank’s 25th governor last month.

In order to provide the clarity on this, E-commerce business is categorized in two categories:

With this press note there is more clarity about e-commerce business in India . Also,  it seems for B2C e-commerce to be open for FDI, going to take some more time.

Thinking @ doing business in India? What Next? 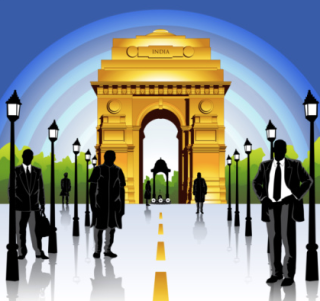 When I meet overseas business delegates during this trips to India, one of the questions I normally ask is “Is this your first trip to India?” and the answer could be: Yes or 2nd, 3rd, 4th…  More than 50% of these delegates, this is their 2nd to 3th  visit to India during last 2-3 years and the purpose is exploring the possibility of doing business in India. They read the news: India offers very good opportunities, its vast market size, its growth rate etc. but at the same time, they read about  bureaucracy, delays and difficulties faced by some of the businessmen who tried it before. It creates a dilemma in their mind- to be or not to be and hence 2nd trip and more trips…  After 2-3 trips they realize that some players had taken the decision to start and now they are settled and doing great.

END_OF_DOCUMENT_TOKEN_TO_BE_REPLACED

The Global Competitiveness Report 2015-16 prepared by the World Economic Forum analysis the conditions of competitiveness of 140 countries. Switzerland, Singapore and USA are leading the ranking. According to the report after five years of decline, India jumps 16 ranks to 55th place. This dramatic reversal is largely attributable to the momentum initiated by the election of Narendra Modi, whose pro-business, pro-growth, and anti-corruption stance has improved the business community’s sentiment toward the government. The quality of India’s institutions is judged more favorably (60th, up 10), although business leaders still consider corruption to be the biggest obstacle to doing business in the country.

India’s performance in the macroeconomic stability pillar has improved, although the situation remains worrisome (91st, up 10). Thanks to lower commodity prices, inflation eased to 6 percent in 2014, down from near double-digit levels the previous year. The government budget deficit has gradually dropped since its 2008 peak, although it still amounted to 7 percent
of GDP in 2014, one of the world’s highest (131st).
Infrastructure has improved (81st, up six) but remains a major growth bottleneck—electricity in particular. The fact that the most notable improvements are in the basic drivers of competitiveness bodes well for the future, especially the development of the manufacturing sector. But other areas also deserve attention, including technological readiness: India remains one of the least digitally connected countries in the world (120th, up one). Fewer than one in five Indians access the Internet on a
regular basis, and fewer than two in five are estimated to own even a basic cell phone.
Posted in Economic trends in India. Tags: Competitiveness, India, WEF. Leave a Comment »

It was a historic moment for India. After a gap of 30 years, India got  a stable majority  government, National Democratic Alliance (NDA)  won more than 50% of seats.  For the last three decades  we had coalition governments. Irrespective of which party had  a major stake, when it’s coalition, it’s difficult to reach agreement on major decisions, as Government is always at mercy of small coalition partners.

Now,  that its majority is with a single political party (BJP), everyone is expecting the government at center would take some bold decision. It is possible. It is important to take decision – some may be wrong, but it is always better to take some wrong decisions than non-decision at all. First 6 months were testing time – firstly because of pressure of expectations and inexperience (for more than a decade BJP was away from ruling position) and secondly because of delayed monsoon. It seems monsoon too was testing patience of the new rulers as well as all residents. Though delayed, finally monsoon has settled and it seems government too has settled down. They have reviewed the situation and it seems now things have started moving.

From the point of view of companies looking at India, either as a manufacturing base or as a potential market, there  can’t be a better time than current. Most important aspect any investor looks for, while thinking to enter a new country, is government stability. Undoubtedly, there can’t be a more stable government than current. Second important factor is leadership. Mr. Narendra Modi, prime minister of India, is known for his strong leadership and proactive approach towards development. Third aspect is  government approach towards industry and commerce. One of the reasons people have voted ruling alliance to power is because of the vision of growth and development NDA promised in their election manifesto. Now it is time that  government acts on its promises and try to fulfill them.  Everybody who knows about India is aware that it is difficult, almost impossible, to fulfill all the promises but any efforts towards even partial fulfillment will be seen as positive movements.

It seems government is moving in the right direction towards fulfillment of people’s expectations from it. Areas NDA government has promised to work on include economic revival, growth, agriculture and balanced development for all. The slogan of new government is “Sabka Sath, Sabka Vikas”  (“participation of all, development of all”) and the new initiative by government “my Gov’  appears to be a right step towards involvement of all in governance.  Through this portal, government is seeking advice, thoughts and ideas on various topics that concern India. At the same timethe portal is asking people to participate directly in those areas which interest them so that they could also be part of execution.

Economic situation is stable,  stock exchange index is showing steady growth,  monsoon, though delayed in many parts of the country,has crossed its average, farmers expect a good crop, government has settled down, people expectations  also have become realistic  and now it’s time for government to really act, start implementing the programs they promised during the election campaign. NDA said “Ache Din Aane Wale Hain” (“Good days are going to come”) and people expect them to come soon. Social media has started mentioning about some policy decisions, which could mean good days have started. And, there cannot be better time for investment in a country than when both Government and people are positive about its future…

NEW DELHI: Expressing disappointment at 4 per cent growth in manufacturing, the FICCI President, Mr R.V. Kanoria, said, “A reduction in interest rates of at least 50 basis points should be seriously considered by RBI as part of its next monetary policy.”

There is need to cut the fiscal deficit to bring down interest rates and stimulate demand, said Mr Kanoria. FICCI predicts a 4.2-4.5 per cent industrial growth in 2011-12.

END_OF_DOCUMENT_TOKEN_TO_BE_REPLACED

Mumbai: Smaller cities are scoring over metros in terms of growing urbanisation, and cities such as Jalandhar, Aurangabad, Bhubhaneshwar, Agra and Raipur are believed to be the next ‘cities of opportunities’.

END_OF_DOCUMENT_TOKEN_TO_BE_REPLACED

Inflation declines to 8.5% on new base year

NEW DELHI: Headline inflation dropped from 9.8% in July to 8.5% in August as the new base of measuring wholesale price index kicked in but it is still above the Reserve Bank of India’s (RBI) comfort zone, prompting analysts to expect a marginal hike in key rates and tightening of monetary policies in the central bank’s policy review on Thursday.

END_OF_DOCUMENT_TOKEN_TO_BE_REPLACED

TORONTO: If it was India’s $35 computer that was splashed in Canadian news last week, now it is the country’s relentless growth story that’s making headlines here.

Writing under the headline “Meet the world’s next growth engine”, the National Post daily Wednesday said that while the rest of the world grapples with the consequences of declining birth rates and mass retirements from workforces, India is set to reap benefits of demographic bulge.

END_OF_DOCUMENT_TOKEN_TO_BE_REPLACED

NEW DELHI — Myanmar’s military ruler Than Shwe flew to Hyderabad Wednesday on the latest leg of a controversial state visit toIndia that has garnered millions of dollars in grants for infrastructure projects.

Human rights groups have severely criticised India for bestowing a formal state visit on Than Shwe, arguing that it helps legitimise a military regime that has been widely condemned for systematic rights abuses. END_OF_DOCUMENT_TOKEN_TO_BE_REPLACED