16mn! India tops world in number of migrants abroad; more than half in Gulf

United Nations: India tops the world in the number of migrants sent abroad and more than half of the 16.59 million live in the Gulf region, according to a UN report.

The 2017 International Migration Report released here on Monday showed that during this century’s period of rapid globalisation, the number of Indian migrants doubled from 7.98 million in 2000.

Did you know that … an international marathon event takes place in Pune every year?

In recent times Pune is known as the “sport city of the country” and the credit mainly goes to the successful hosting 21 editions of the “Pune International Marathon”. The annual mega event, featuring top long distance runners from all over the globe has placed the city on the sports map of the world.

The origin of that event comes from 1920 when the famous Deccan Gymkhana hosted the first meeting of the Indian Olympic movement; this was followed by organization of the first ever national marathon of the country. The event is still considered to be the milestone in the annals of Indian sports, being also the selection trials to select the Indian team to participate in the Antwerp World Marathon in 1920. The grueling 42.195 meter race was won by Phaddeppa Chougule clocking 2:48:49. Seeing the success of the Indian athlete, the Deccan Gymkhana continued to support the long distance events.

Unfortunately, the event was shelved into cold storage after some time. Rebirth of the historic event came by only because of the vision and foresight of the dynamic and charismatic city member of parliament of Mr. Suresh Kalmadi, presently heading the Indian Olympic Association (IOA). He christened the event as the Pune International Marathon on September 25, 1983.

The pomp and pageantry thus created since 1983, has consolidated Pune International Marathon as the most sought after race and equated it with the likes of Boston, London and Paris events. However, the task to reach the zenith was not easy as several obstacles and hurdles had to be overcome. But this did not deter Mr. Kalmadi and his team.

The state association had also requested the Athletic Federation of India (AFI) to grant permission for hosting the women’s marathon simultaneously. Held in September, 1983, the event became a trendsetter in more than one ways. The field attracted 50 foreign athletes along with the country’s top long distance runners. The aura thus created, caught the imagination of the residents of Pune who participated in large numbers in other race organized along with the main marathon and the half marathon.

Since then, the Pune International Marathon has traveled a long distance to become recognized as the national championship and an international event where Indians have been rubbing shoulders with leading international marathoners.

Posted in Did you know that...?. Leave a Comment »

Did you know that … India is the largest producer of fruits and vegetables in the world?

The total production of fruits and vegetables in the world is around 370 MT. India ranks first in the world with an annual output of 32 MT fruits, about 8% of the world’s fruit production; also is the second largest producer of vegetables (ranks next to China) and accounts for about 15% of the world’s production of vegetables. The current production level is over 71 million MT and the total area under vegetable cultivation is around 6.2 million hectares which is about 3% of the total area under cultivation in the country. The diverse agro-climatic zones in the country make it possible to grow almost all varieties of fresh fruits and vegetables in India.

According to National Horticulture Board the main fruits grown in India are apple, banana, lime/lemon, mosambi, orange (mandarin), grapes, mango and papaya. In case of vegetables, potato, tomato, onion, cabbage and cauliflower account for around 60% of the total vegetable production in the country. Vegetables are typically grown in India in field conditions; the concept is opposed to the cultivation of vegetables in green houses as practiced in developed countries for high yields.

Only 2% of these crops are processed into value-added products. Hence, there is a need for maximum commercial utilization of fruits and vegetables and to adapt production and marketing activities to the requirements of the world market and to cater to domestic demand which, over the past few years, has been increasing because of various socio-economic factors. If the nutritive value of the processed food products could be maintained, this sector would emerge as a major value-added food industry.

There are over 4000 fruit processing units in India with an aggregate capacity of more than 12 lakh MT (less than 4% of total fruits produced). It is estimated that around 20% of the production of processed fruits is meant for exports, the rest caters to the defense, institutional sectors and household consumption. Mango and mango-based products constitute 50% of exports.

Did you know that … all of India is under a single time zone?

There is only one time zone for all of India. India does not observe any form of daylight saving time or any other seasonal adjustments to the time. With India’s western and eastern borders more than 2,000 km (1,250 miles) far from each other, India could well have three time zones, like China; however, India chooses to have a single time zone across the whole country.

India’s time zones were established in 1884. Originally there were two time zones, the Bombay time and Calcutta time. Bombay continued to have a different time until 1955.

In the very early days of railways in India, local time was observed at each large city, in common with practice in most other countries at the time. Because of their importance as commercial and economic centres, Bombay time and Calcutta time assumed special importance and were followed for many official purposes in the late 19th century, effectively forming two time zones for British India. Calcutta time was 5 hours, 30 minutes, and 21 seconds in advance of GMT (Greenwich Mean Time), while Bombay Time was 4 hours and 51 minutes ahead of GMT. Many railway companies, however, standardized on using Madras time as being in between Bombay and Calcutta times.

Standard time zones can be defined by geometrically subdividing the Earth’s spheroid into 24 moons, bordered by meridians each 15° of longitude apart. The local time in neighboring zones would differ by one hour. However, political boundaries, geographical practicalities, and convenience of inhabitants can result in irregularly shaped zones.

Posted in Did you know that...?. Leave a Comment »

Did you know that … India has the largest number of post offices in the world?

With around 155,618 post offices and over 566,000 employees, India has the largest postal network in the world. The modern postal service in India is more than 150 years old.

In 1854, the post office in the province of Sindh (then in British India) made postal history when India became the first country to issue postage stamps.

In 1911, India achieved another “first” when a biplane from Allahabad to Naini flew with 6500 pieces of mail. The world’s first official airmail flight took place in India, on February 18th of mentioned year. It was a journey that spanned 18 kilometres and lasted 27 minutes. Henri Pequet, a French pilot, ferried around 15 kilos of mail. A special postmark, First Aerial Post, was created for the event.

Today, Indian postal system ranges from arid deserts of Rajasthan and Kutch to the icy heights of Laddakh. India has the highest post office in the world in Sikkim at a height of 15,500 feet (postal code – 172114).

Did you know that … there is no other country in the world that produces as many kinds of spices as India?

The fame of Indian spices is older than the recorded history; the climate of the country is suitable for almost all spices. They constitute an important group of agricultural commodities which are virtually indispensable in the culinary art. They add tang and flavour to otherwise insipid foods. Some of them also possess antioxidant properties, while others are used as preservatives in some foods like pickles and chutneys.

There are about eighty spices grown in different parts of the world and around fifty of them are grown in India. The spices that India can offer in abundant quantities are pepper, ginger, turmeric, chili, cardamom, celery, fenugreek, fennel, cumin, dill, coriander, cinnamon, ajowan, cassia, clove, nutmeg and mace. Among the spices exported, pepper has the leading position in terms of both quantity and amount. END_OF_DOCUMENT_TOKEN_TO_BE_REPLACED

Posted in Did you know that...?. Tags: Agriculture, Food. Leave a Comment »

Did you know that … Indian wines were exhibited at the Great Calcutta Exhibition of 1884? 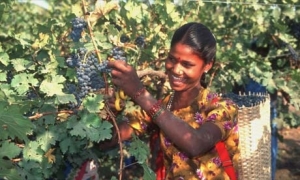 Wine is a known taste for indian palates; wine production in India comes from the Vedic period. In Vedic period wine was often referred as “Somarasa” (Soma-squeezing juice from plants, Rasa-juice); it was believed to be associated with God “Indra” (king of Gods). The presence of European travelers during XVI and XVII century approached wine to emperors. From 1612 wine became popular due to British influence and, as cost of shipping wine in India was very high, British started to cultivate vineyards in Surat and Kashmir. It was produced red wines (Kandhari) and white wines (Bhokri, Fakdi, Sahebi, etc).

Portuguese settlers improved wine and also introduced a new variety, Vindaloo, originally called “Vin d´Ail”. That wine was produced introducing meat in barrels, some garlic and spices. Indian wines were exhibited and favorably received by visitors to the Great Calcutta Exhibition in 1884.

After some years of pause and destruction of vineyards as per unknown reasons, wine revived in 1985. Known wineries were established at that time, taking European technology.

Today wine is seen as a sophisticated drink and in fact considered being healthier than liquor. This factor has made it popular even amongst women and the young starters. Wine consumption is concentrated in urban areas; Mumbai accounts 40% of sales, Delhi accounts around 15%, Goa 8% and Bangalore around 6%. There are about 38 wineries, with a total production of 6.2 yearly million litres. Maharashtra is the state of wine, there are 36 wineries and produces 5.4 million litres.

Posted in Did you know that...?. Tags: Agriculture. Leave a Comment »
« Older posts
INDOLINK Consulting's blog – Your business blog to India
Create a free website or blog at WordPress.com.